A kitchen has taken a central place in our households, doubling as both a living area for family and a dining room with intimate friends. With that frequent use, kitchens do have a short span of life and need a touch of elixir every couple of years to look as supreme as before.

For an average homeowner, a kitchen remodeling project is a major expense. It takes thousands of dollars to get close to a design that keeps coming into your head until you have it materialized in your kitchen.

So, it is only natural to be concerned about the cost of an undertaking before actually taking the first step.

In this post, we are going to discuss the cost of a kitchen makeover, at length, and identify the areas and tips that will help you in saving significant amounts of money.

Before we delve into the cesspool of figures and crunch some numbers, let’s discuss a major factor that plays defining role in the cost you must pay for your dream kitchen.

Where you live can add to the estimates and bill for your kitchen remodeling project. As a general rule of thumb, if you live in the South, you can save up to $20,000 with your next kitchen makeover project as compared to that of the North and the West.

There is also a wide gulf in the cost between rural and urban areas in any state or region. So, you need to keep those variables in mind before making your mind about the kitchen project.

Now to the cost!

According to the studies by Remodeling Magazine conducted in 2019, the average cost of a midrange kitchen remodels corners around $66,196. On the other hand, the estimate for an upscale major remodel, that number swells up to a staggering $131,510. These numbers correspond with the national average across the US.

There is a steep contrast between average numbers when you move to the Pacific region. Remodeling Magazine propounds that the average for a mid range kitchen remodel makes a steep jump in this region, at around $72,513. This is ten thousand more than the national average.

For the upscale major kitchen remodel, the publication has found that $143,333 is the average in the region which is the same difference as between the average numbers in the regional and national areas.

In the area of Maryland, South Carolina, Georgia, Washington, D.C., the numbers for midrange major kitchen remodel are a couple of thousands lesser than the national average, which is $63,387. And if you need an upscale major kitchen to remodel in this region, the cost will be around $126,307. 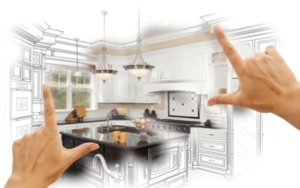 The above-mentioned cost averages are for general renovation plans. If you are eyeing to add elemental design to your kitchen, you must be ready to spare big bucks.

Here are some upgrades that are counted other than the general estimate of kitchen remodel:

The major part of your expense for the kitchen remodeling is the extent of your project. For a majority of homeowners, the biggest cost comes from cabinets, taking usually around twenty-five pc of the entire budget. Instead of going for custom cabinets, you can get many cheaper options at Ikea or other retail stores.

The same goes for the sink and faucets. In order to strike the sweet spot where both luxury and utility align in the same direction, splurge your cash on faucets and get an affordable sink and you are good to go for the foreseeable future.

How To Save Money

Every kitchen remodeling project needs some sort of planning on your part. This is to help you keep in the right direction all along the way and spend where it actually adds value to your kitchen.

Experts in the area of kitchen remodeling recommend around twenty percent of your budget be set aside for surprises such as minor damages or on-the-spot purchases.

This covers you when you are not in the position to procure funds for the late-hour demolitions and even unpleasant costs, like water damage, electric system repairs, and so on.

This goes without saying that the resources you have to put into your kitchen remodeling plan are scarce. For everything you may want in your new kitchen, you will have to let go many. This is where budgeting and its objectives help you to keep in line all the time.

It is easy to find the sweet spot in this segment. You need to make an assessment between how much you are willing to spend on your kitchen remodel and how much you can redeem in the event of the sale of the house. This gives you a clear picture of whether you should continue with your original budget or make amends.

After going through this succinct post, you will have a clear idea of the average cost you have to put up with if you want to realize the kitchen of your dreams. It may sound daunting, but with clear planning and budgeting, you can make do with limited resources.

What Should Be Considered When Designing a Kitchen Layout?

Does Removing a Wall Between Kitchen and Dining Room add value to your Kitchen?
0 replies