It is a trend of removing the wall between kitchen & dining room and has increased over the past year. And it is the only trend that has increased after the pandemic! It makes sense when you think about it because it’s been over a year since the whole family got together in the house.

If you’ve been thinking about removing the wall between the kitchen and dining room for a long time, here are four reasons why you should!

4 Perks of Removing Wall Between Kitchen and Dining Room

One of the biggest benefits of removing the wall between the kitchen & the dining area is that it creates an open space with no walls, separating the areas. It makes preparing meals and table gatherings much more welcoming than ever.

This concept helps to improve the overall working flow of the home. With lots of walls and separate rooms, the layout can feel a bit erratic and incoherent. But with an open kitchen, each room easily blends into the next. The decision to remove the wall between the kitchen & dining room also made everything feel less tempestuous.

Old houses were built for various reasons by separating their rooms on purpose. But in recent years, we have seen a trend towards open concept floor plans. Homeowners today generally want a more open and fluid feel to their living spaces.

The biggest attraction in bringing kitchen & dining together is creating a larger and lighter space than before. It is appealingly good, but also good for our mental state!

One of the worst things we can do for ourselves, that we spend a lot of time in a room with no windows or light. As you can imagine, an open kitchen lets in a lot of natural light while also giving everyone an idea of ​​what’s going on. By removing the wall, the light goes from the kitchen to the dining room and vice versa.

3)  It improves your Functionality

When you separate the kitchen & dining area, it can be a pain to go through both to serve and clean the mess. Add more traffic to the mix, with kids running around the kitchen for drinks, etc and it can be a nightmare. 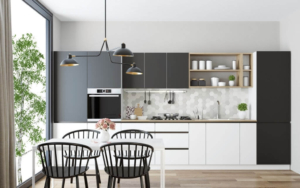 If you remove the wall between the kitchen and dining room, then it will make the difference in the home. It’s easier for everyone to get what they need in rooms, and as we all know, comfort is everything. Especially when we are busy cooking or entertaining!

Removing the wall will eliminate the dysfunctional path between the two frequently visit points in a home! Once removed, everything you need is immediately available.

4)  It gives you more time together

There was no longer a physical barrier between the people who could be in the room at the same time. Indeed, the two rooms often feel isolated from each other. However, when is combined into an interconnected space, it makes it much easier to entertain and relax in that environment.

It will easier for you to communicate between people in the kitchen & dining room. The host in the kitchen will not excluded from the conversation in the dining room. Hosts returning to the kitchen, to take something don’t feel like, they’ve left their guest. Parents in the kitchen can easily supervise children sitting near on dining table. It seems more convenient.

Whether it`s cooking for best friends or the own circle of relatives, the preparation of dinner will not feel like that you are alone inside the kitchen. With an open space, you will be able to chat with your circle of relatives or buddies at the same time as sitting at the table. Anybody can spend time together.

Does removing a wall between Kitchen & Dining room is for me?

If you want a more open space, like to see and/or talk to people in the dining, more light to come in between both rooms and want easier access to your kitchen from the dining room then removing the wall between the kitchen and dining area might be for you!

What to consider in removing the wall between Kitchen & Dining room?

First, make sure that the wall is load bearing. If the wall you want to remove is not load-bearing, removing the wall will be possible, but more problematic. Before carrying out any work, do an estimation from a home remodeling contractor, and ensure that you have all the necessary permits approvals from your state.

How Much Does An Average Kitchen Remodel Cost

What Should Be Considered When Designing a Kitchen Layout?

How Many Coats of Paint Needed for Exterior House?

How Can You Optimize Your Kitchen Design?
Scroll to top